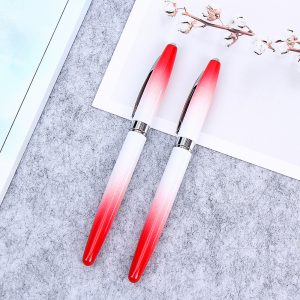 New pen to hand
Generally, the pen can be used normally after it is applied to the water. It is not necessary to take a new blisters as the individual has said. Of course, sometimes it is inevitable that you will encounter a situation where the pen does not have water or the tip of the pen is dry. At this time, it is necessary to handle it a little. Generally, it is necessary to clean the pen after the purchase, because some pens are not cleaned when the pen tip is checked at the factory or after the counter customer tries the pen. The time is long, the components in the ink are condensed, and the pen tip is blocked. Ink tank, so it will cause poor water supply. In this case, the pen tip needs to be removed, and it is immersed in warm water (not to be boiled) for half an hour, then wiped dry, and it can be used normally after being installed. If it still doesn’t work, you can extend the soaking time. If it doesn’t work, you need to remove the nib metal piece, then use a small brush to clean the ink guide groove on the back of the pen and the entire capillary structure (the small slits on the plastic part of the nib). If the water is not smooth, it may be the reason for the nib itself. One is that the tip of the pen tip is too narrow. At this time, the pen tip can be pressed down slightly for one to two seconds in the pen position when writing normally, or the pen can be expanded with a thin blade, but care must be taken. The second reason is that the ink guide groove is too narrow. At this time, it is necessary to use a thin blade to expand the ink tank. Also be careful. Some new pens, some of which have just started to use, will have some poor water. That’s because the new pens are like this, so don’t be too nervous. After writing for two or three days, the pen will be smoothed and it will be a lot better.

Maintenance
When writing, you should put some manuscript paper under the paper to enhance the elasticity of the nib and reduce friction. Do not write on the tip of a hard material such as metal to prevent damage to the nib. Avoid mixing different inks in daily use to avoid sedimentation and block the pen. The pen should be cleaned once a month or so to keep the ink flowing smoothly. If you use carbon ink, you should wash it thoroughly. If the pen is not used for a long time, it should be washed and stored. And don’t use excessive force when writing.

Cleaning
Generally, it can be repeatedly drained and drained until the drained water is clean and dry. If the interval is cleaned for a long time or if the pen is intended to be washed and sealed, the parts must be disassembled and cleaned separately. After the initial disassembly, it is divided into five parts: the nib, the converter (inker/ink bag), the pen, the pen cap, and the pen holder. The latter two are generally not cleaned. The metal part of the nib and the tongue (inking structure) should be further disassembled, and the nib metal piece is rinsed with water, and the entire inking structure can be carefully washed with an old toothbrush and then placed in warm water for one night. Dry all parts after cleaning, and then seal them when they are completely dry. Of course, different pens have different structures. Not all pens can be disassembled. For pens that are difficult to disassemble, only the first method can be used for cleaning. Do not forcefully disassemble the pen.
Need to say here, there is a kind of elbow pen called “Calligraphy Pen”, which has the characteristics of large changes in the thickness of the writing stroke. When used, the pen is pressed lower, the strokes are thicker, and the words can be written slightly larger; the pens are vertical, the strokes are fine, and the words can be written slightly smaller. This type of pen is more powerful than an ordinary pen and is often used to write large fonts such as envelopes. However, writing with this pen is difficult, and beginners should not use it to practice words.
Last but not least, you should pay special attention: Do not wash the pen with boiling water or hot water, otherwise it will cause damage to the pen. In particular, some well-known pen brands use a material called “celluloid” to make a pen, such as Pelikan, which can cause serious damage to this material! And don’t let the water touch the tip of the pen, otherwise the pen may become lighter or unable to write.