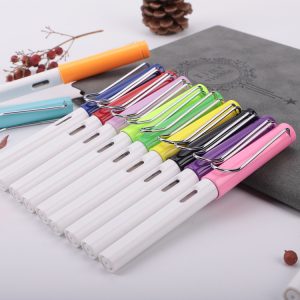 When we use the pen, some parameters are not visible. But we can still use some techniques to get the pen good or bad. Let’s take the best-selling pen on the market as an example.
A. The tip of the pen can pull out the pen holder and move the pen tip on the white paper. Generally, the difficulty of polishing the nib is the side. We do the experiment, using 30 degrees on the left side of the pen and 30 degrees on the right side to move on the white paper. If it is still smooth, it indicates that the sliding of the nib is guaranteed.
B. The main reason for water leakage is that the seal of the pen is not good. We can block the tip of the pen and squeeze the pen. If it feels difficult to squeeze, it means the water leakage is very good. Of course, water leakage is a comprehensive parameter.
C, continuous writing time, and intermittent writing time is the soul of the pen. If you buy a pen, you can’t guarantee continuous writing and intermittent writing, which is equal to a waste. The writing time is different depending on the width of the writing. But the general necessary time is at least 30 minutes.
D. Some mechanical properties, such as the force of the clip, the mechanical properties of the parts, and the pull of the pen, are all of the concern of the user. Mechanical properties generally do not require any equipment and can be tested by hand. Users can pay attention to these details when choosing. Especially some expensive pens.
E. For the average user, the more concerned about the appearance of the pen. It’s very cool, it’s the original idea of ​​a pen. Like the gift pens, models and colors that Zee has launched, there are over a thousand kinds of orchestration to choose from. Parker also designed three or four new styles in a month, and it seems that the major pen manufacturers are making a big fuss about their appearance.