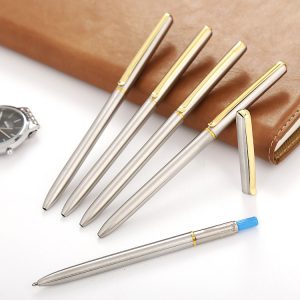 1. The pen is more durable than the general pen, but if it is used improperly, it can’t be written. This is mainly because the dry solid ink sticks around the steel ball to hinder the ink from flowing out. Ink is a viscous oil which is prepared by using sesame oil, synthetic pine nut oil (mainly containing terpene alcohol), mineral oil (oil obtained by fractionating petroleum and other minerals), hard rubber added to soot, etc. .

2. When using a ballpoint pen, do not write on oily or waxy paper. Otherwise, the oil and wax embedded in the copper bowl along the side of the steel ball will affect the ink and can not write the word, but also avoid the impact of the pen, exposure, no need When the gloves are good, the cap is worn to prevent the pen tip, the pen holder from being deformed, and the refilling body from leaking oil. In case of cold or long time unused. When the pen is not out of oil, you can put the pen in the warm water for a while and then stroke the pen tip on the paper to write the word.

4. the ballpoint pen landing, if the pen tip touches the ground at 90 degrees, the ballpoint pen tip will not be damaged, but if the mouth is bruised, this will cause “oil” phenomenon at this gap. In severe cases, the ball will fall off and appear. Difficulties in writing and so on.